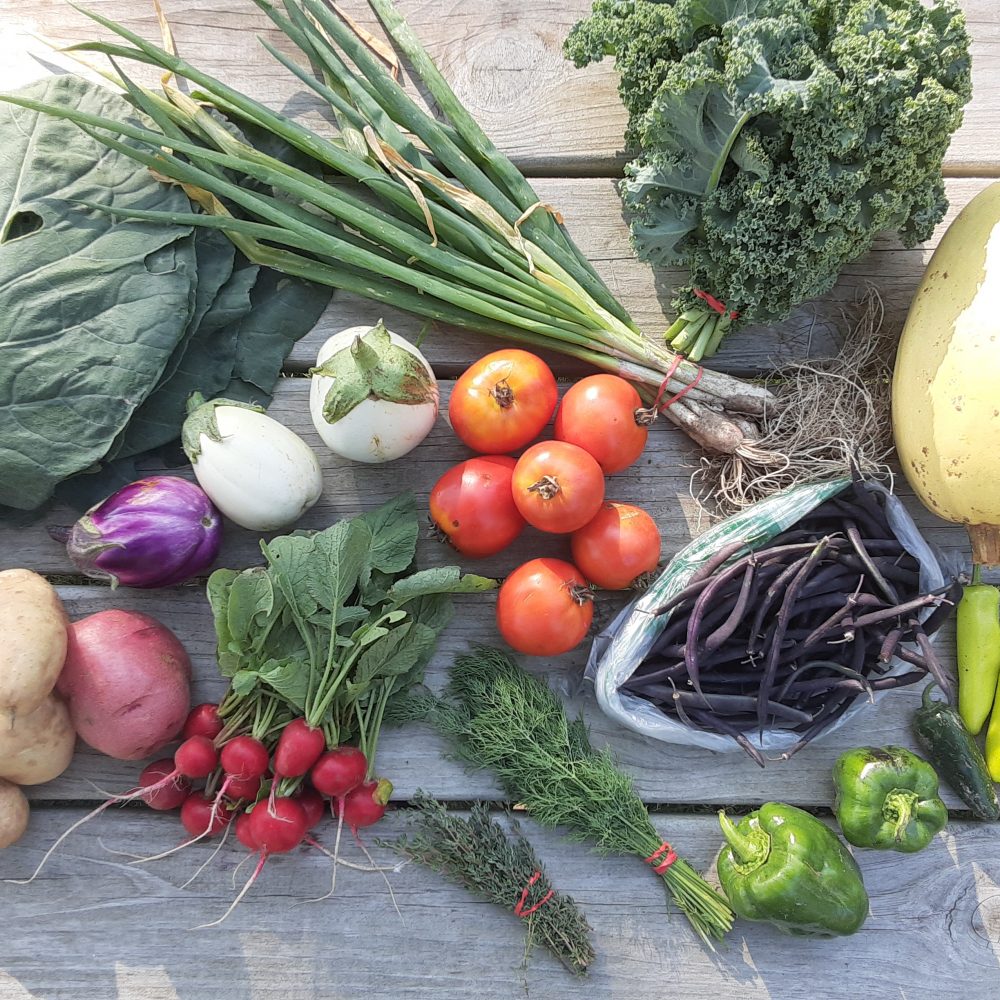 “Fight for the things that you care about. But do it in a way that will lead others to join you.” 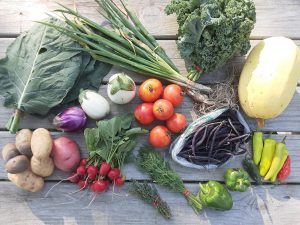 *Winter squash will come in each of the remaining boxes – this week is spaghetti squash.  We had it tonight for supper and it was sweet and delicious. There is a fun recipe down below to try out!
*Finally, the weather has warmed and the green beans have matured – you will also get them next week
*Potatoes go well with the green onions, thyme or dill
*If you are not going to use the herbs soon, you can hang them up to dry and use them in the dead of winter
*We had our first light frost last Thursday night.  It killed many of the top leaves of the plants but did not kill any fruit
*We are getting to the end of our summer tomatoes, peppers and eggplant now as the days are getting shorter
*Like always with the tomatoes, some are ready to eat and some may need to sit on the counter for a couple of days
*Two weeks in a row of collard greens – another creative way to eat them is by using them as a wrap instead of a tortilla. Here is an example!
*Keep returning our boxes and ice packs please and thank you 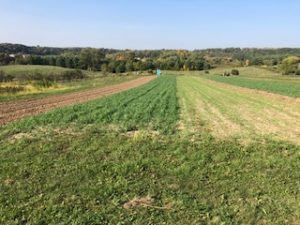 These days I have been spending a lot of my time here at the farm planting cover crop.  Once a section of field is done producing its crop/crops, I mow it down, disc several times to cut it up and incorporate it into the soil, and then sow cover crop seed onto the land. Finally, I drag it to ensure good soil contact and hope for a good rain soon after.  Here is a photo of a few strips: one planted in a pea/oat mix that will winter kill, one in a hairy vetch/winter rye/field radish mix and the final all dirt one has just been planted in only winter rye that will grow strong in the spring for weed suppression, organic matter and green manure.  This is an important part of organic and sustainable farming that often goes unnoticed.  It is very important to always have something growing on your soil to protect it from erosion, but also to actually make soil by increasing the microbial life and adding organic matter to the soil.  I will continue to plant winter rye in areas as they are freed up until the end of October.

Here in week 15 of shares, our Winter Squash have finally begun to reach maturity and have started their curing process.

Winter Squash, though they are susceptible to bite marks from pests, usually take a lot of time and effort to break through their rock-like exterior. This week, we’ve decided to let everyone try our Spaghetti Squash, which have been “cooking” up since around the beginning of Summer.

The Spaghetti Squash has it origins set in China around the 1800’s. In 1930, a Japanese seed company was searching for new varieties of plants to promote and stumbled across the Spaghetti Squash. After breeding and improving the genetics, the Sakuta Seed Company released its seeds to the world and in 1936, Burpee picked up and began promoting the Sakuta “Vegetable Spaghetti” seeds.

Weighing in around four to eight pounds, the Spaghetti Squash are typically a vibrant yellow color or even shades of green. What gives this variety of Winter Squash its name are the stringy, nutrient dense innards that separate into strands that are quite similar to Angel Hair pasta. To harvest these noodles full of natural vitamins, minerals, antioxidants and fiber, just cut off the top, bottom and slice it down the middle. Scrape out the seeds and stringy flesh that contains them, then brush them with a bit of olive or cooking oil. Pop your halves into the oven at 400 degrees and allow them to cook for about thirty to forty minutes. Afterwards, let them cool for a bit while grabbing a fork and bowl. Finally, scrape the squash lengthwise to harvest your winnings for all the hard work it took to break through the skin and enjoy!