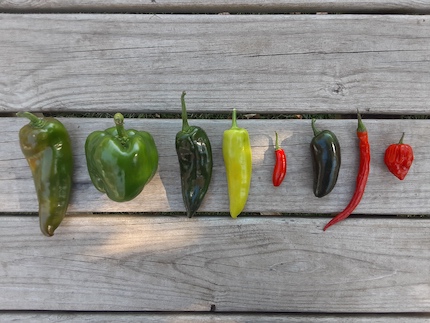 “Pain is inevitable, suffering is optional.” 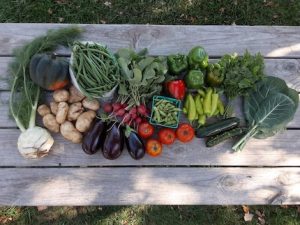 Farmer Notes
*Happy Fall everyone!  Today is week 15, so we have three more boxes after this one.  We would love to have you join us for our 5, bi-weekly delivery Fall Share!
*The radishes are beautiful, crisp and abundant – enjoy!
*The green beans are beautiful, crisp and abundant – enjoy!
*We are getting to the end of the summer squash and the tomatoes, but it has been a good run
*From the summer squash to the winter squash – everyone will get Delicata next week
*Edamame for the full shares is a special treat since we usually just grow these for ourselves.  Steam them and add a bit of butter and Sriracha to make a tasty finger-lickin’ snack
*We switch back to the bell and hot wax peppers this week – next week we will offer a brown bag special of hot peppers for $20 for those of you who want to make hot sauce or to dry them and make powder
*The potatoes are a baking potato called Cascade.  They have a wonderful flavor and store well
*Lettuce and beets for all next week
*Parsley is great with the potatoes, to make chimichurri or pesto,  with sauteed summer squash and as a garnish

This is a really nice time on the farm.  The weather is not too hot, and not yet cold.  The weeds and bugs have slowed, and we are no longer planting vegetable starts or seeds into the field.  The greenhouse is empty.  The frost seems to be keeping its distance and we received a 1/4 inch of rain this week.  The fields look a lot cleaner as I can mow down many of the old beds/crops and put large plots into different cover crops for the fall and winter.  Our energy is 73.4% into harvesting and in curing these for storage.  The remainder of our time lies in some weeding and irrigation, preparing and planting in the hoop house/caterpillar tunnel, covering bare soil in cover crops, and in field cleanup of row cover, plastic mulch, and drip tape.  Soon we will pay attention to frost protection of many crops still remaining in the field.  And so the year unfolds – we are super happy that you have joined us!!

~Norm
Crop of the week – Peppers

This week we are highlighting a familiar but nevertheless wonderful crop that many of you probably have in your kitchen at this very moment in differing forms, peppers. Peppers (genus Capsicum) are a member of the nightshade family – the same family as tomatoes, eggplants, okra and white potatoes. There are more than 30 species of flowering pepper plants and many of them are also wonderful additions to meals.

This season, we have 8 varieties of peppers. We have sweet bell peppers, cubanelles (also known as Italian frying peppers), hot wax peppers, poblano peppers, jalapeno peppers, serrano peppers, cayenne peppers and habanero peppers. You may have found several varieties of these peppers in your boxes already. Peppers can vary in size, heat and color, depending on the variety of the plant and what time of the year we harvest it. Hotter peppers, such as cayenne and habanero peppers, have higher levels of capsaicin, a chemical compound. Peppers can be eaten raw, pickled, or can be dried and powdered and used as a spice!. Hot sauce is often made out of hot peppers as well!

Peppers are native to South and Central America and are particularly important in the cuisines of many parts of Asia, Central America, as well as all over the world. Traces of pepper fruits have been found in the prehistoric remains of Peru and Mexico. It is believed that peppers were actually spread to Spain and other parts of Europe due to the seeds being mistaken as a form of Black pepper.

Capsaicin also has medical benefits as well. It can be applied topically in ointments and creams to soothe sore muscles and joints. Vanessa, our farm manager, has made a salve using cayenne peppers in the past and others have found it to be very beneficial. Capsaicin can also be ingested internally to help with digestion.

Throughout this season, you may get a variety of peppers that may seem a little unfamiliar but we hope that it will still bring joy, excitement and adventure to your kitchen and beyond!

If there is any mold, you may not have enough salt in your brine. Mold will not form on a proper brine, however, a white skim that forms on brine is not mold, it's yeast and you can scoop it out.

*Non-chlorinated, filtered, purified or distilled water is best as chlorine can affect the fermentation.

Pippa; Portrait of the farm dog in winter.