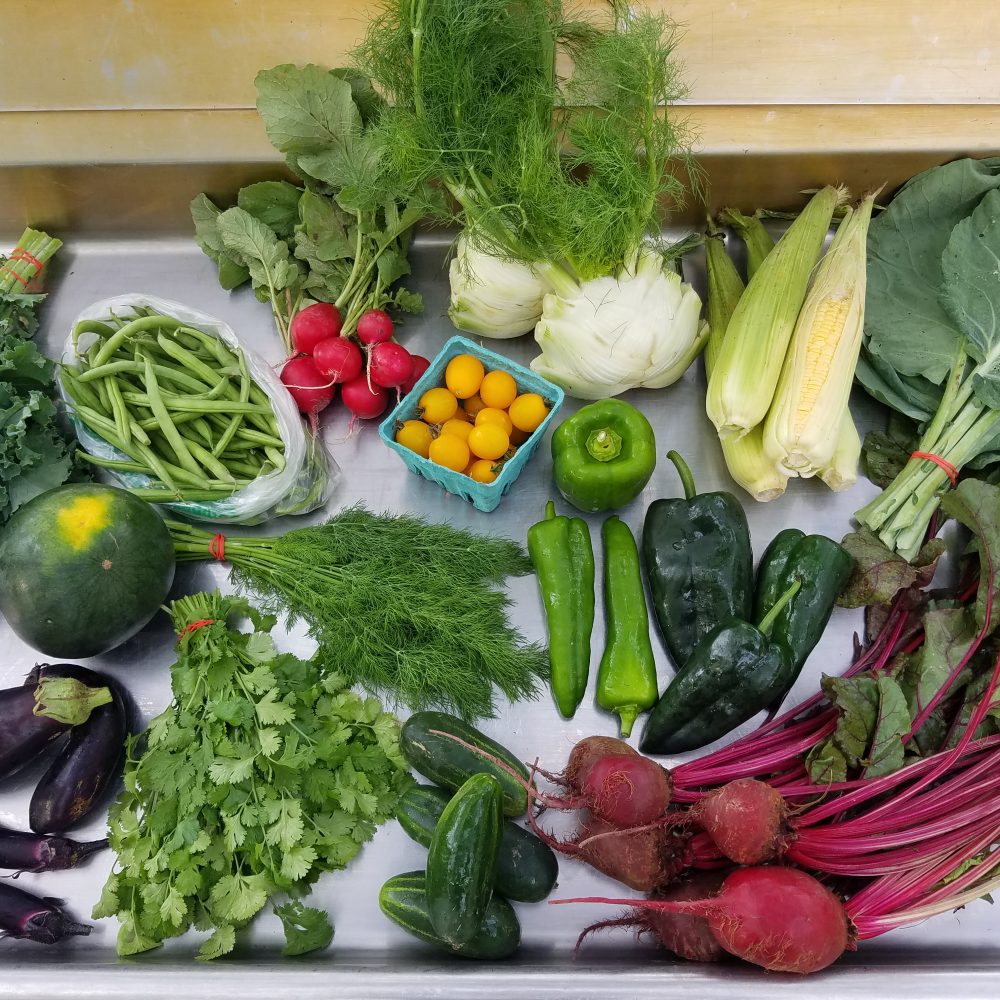 “Intuition is really a sudden immersion of the soul into the universal current of life.”

*We anticipated having sweet corn for all shares in this last picking but unfortunately it did not work out that way. There was an abundance of bugs out there including corn worms and corn beetles, and a lot of the ears were wilted and/or just didn’t fill out enough. I am also thinking that the rain we got last week didn’t help prolong their life above ground either. We picked the better ones while harvesting, however we are certain you will still find some worms in the tips of the corn. Just cut that part off!

*Tomato season is nearing its end

*We were hoping to be able to give everyone cucumbers and dill together at some point this year but the timing was never right, and now we have a ton of beautiful dill but no cucumbers! You will have to get creative with dill this week-try using it in tuna/chicken salad, making a salad dressing, or making a dill dip. You can always dry it for later too, but of course it is better fresh! We will give it one more time next week along with potatoes; a potato salad will be in store! 🙂

*Everyone will be getting a watermelon next week 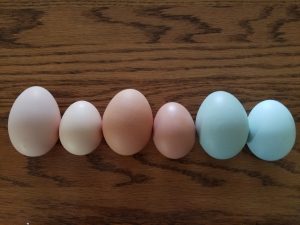 *Our younger chickens are finally starting to lay more eggs – they are smaller than the average size egg when the chickens are under a year old (they are about 7 months old) and are referred to as “pullet eggs.” If you get an egg share you will notice a few of the pullets in each carton, as we like to integrate them in with the others. They won’t be that size for too much longer! 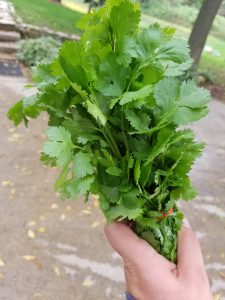 Crop of the week – Cilantro

This week’s pick is Cilantro, or Coriander Sativum. A warm weather annual with white, pink or lavender flowers that is part of the Apiaceae family, which includes carrots, celery and parsley. Its lacy strong-scented foliage (Cilantro) and aromatic seeds (Coriander) have been used for centuries across the world and it originates from Middle Eastern parts of Europe. For over 5,000 years the leaves, the stems and the seeds have been used for cooking. In ancient Egypt, Coriander was placed inside tombs and in parts of Israel the seeds were used as a spice.  Cilantro, or Chinese Parsley as some call it, has not always been a culinary favorite. During the 16th century in Europe, Cilantro was treated as an unwanted herb because of its foul smell and taste. It is most popular in South Asian, Spanish and Middle Eastern dishes and salads. The plant is used for its leaves and seeds. Mature seeds have a pleasantly sweet-spicy fragrance and are used for flavoring sauces, meats, sausages, stews, chutney and pies. Furthermore, the seeds are an ingredient found in curry powder, while young seeds are never used for culinary purposes because they have an unpleasant fragrance and bitter taste. We hope you enjoy this herb!

A day in the life on the farm. Bear with us as we

We are a family farm. Seasonal interns live and wo

Thistle in the pasture

We’re trying something different this year; a ja

Portrait of Farmer Josh. Food is more than just fo